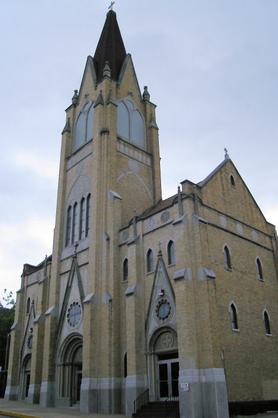 Nestled amid the Appalachian Mountains, in a former coal mining hub, Nanticoke, Pennsylvania is a small city made up of approximately 10,000 residents.
Between 1874 and 1942, six Roman Catholic Churches were founded here.
At the time of their founding, and for many years, all six churches flourished.  In fairly recent years however, due to the lack of priests, diminishing financial resources, and, shifting population demographics, our diocese and city went through dramatic changes.  After several years of preparation, and by God's Grace, a new Roman Catholic parish was formed; under the name of our patroness, Saint Faustina Kowalska.

Founded July 1, 2010, Saint Faustina Parish has grown into a vibrant, active faith community.  We serve 1,800 families in the Greater Nanticoke Area.
With Saint Faustina  as our guide, we strive to honor and glorify the Most Holy Name of God and His Son, Jesus Christ.